In this tutorial, you will learn about Python for loop used for the iteration of a block of code over a sequence including Python lists, tuple, string, and dictionary. 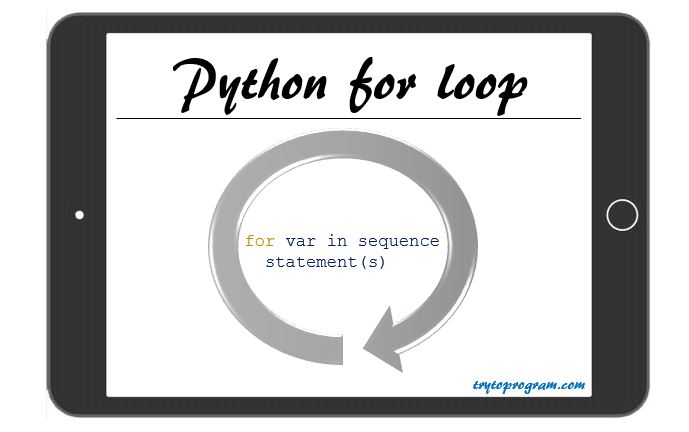 Python for loop is used for repeated execution of a group of statements for the desired number of times. It iterates over the items of lists, tuples, strings, the dictionaries and other iterable objects.

“For all items in a list or sequence, keep doing this“

As seen in syntax, a Python for loop starts with a keyword for, followed by a variable that holds the value of items in the sequence we iterate over. The sequence can be list, tuple, string, dictionary or any other iterable object.

Flowchart of Python for loop

As seen in flowchart above, in for loop, first it is checked whether or not we have reached the last item in the sequence. If not, the body of for loop is executed again else the flow of program jumps out of for loop.

In the following example, for loop will iterate through list py_list and print each item in the list.

Python for loop example 2: Iterating over a Tuple

In the following program, for loop will iterate over the tuple of first four prime numbers and print them one by one.

Python for loop example 3: Iterating over a String

In the following program, for loop will iterate over the string and print each character in that string.

Python for loop example 4: Iterating over a dictionary

In the following program, for loop will iterate over the dictionary ‘bikes’ containing company name as key and motorbike model as value and print keys and values.


Note: If we don’t mention explicitly bikes.values( ) by default the program will always iterate and print only keys instead of values.

So far in this article, we learned about using for loops iterating over a sequence of list, tuple, string, and dictionary.Now let’s discuss a Python function

Now let’s discuss a Python function called range( ) used for generating a range of numbers and how it is used in Python for loops.

The range( ) is a built-in Python function used for iterating over a sequence of numbers.

Here is how we can use range function.

This script will generate following output.

In above program, len( ) is a built is a built-in python function to calculate length. So we have used len( ) to iterate through list using indexing.