In this article, you will learn briefly about the history of Python programming. Here we will discuss the inception of Python, how it all began, and where it has reached till date. Basically, we will get familiar with the evolution of python over the years and the history of Python.

Python was introduced by Guido Van Rossum in 1989.

So how did Python happened and Why was it developed then?

History of Python: Inception and Development

In the early 1980s, Van Rossum used to work at CWI (Centrum voor Wiskunde en Informatica) as an implementer of the programming language called ABC. Later at CWI in the late 1980s, while working on a new distributed operating system called AMOEBA, Van Rossum started looking for a scripting language with a syntax like ABC but with the access to the Amoeba system calls. So Van Rossum himself started designing a new simple scripting language that could overcome the flaws of ABC.

History of Python: Story behind the name

Often people assume that the name Python was written after a snake. Even the logo of Python programming language depicts the picture of two snakes, blue and yellow.  But, the story behind the naming is somewhat different.

Back in the 1970s, there was a popular BBC comedy tv show called Monty Python’s Fly Circus and Van Rossum happened to be the big fan of that show. So when Python was developed, Rossum named the project ‘Python’.

The first ever version of Python(i.e. Python 1.0) was introduced in 1991. Since its inception and introduction of Version 1, the evolution of Python has reached up to Version 3.x (till 2017).

Here is the brief chart depicting the timeline of the release of different versions of Python programming language. 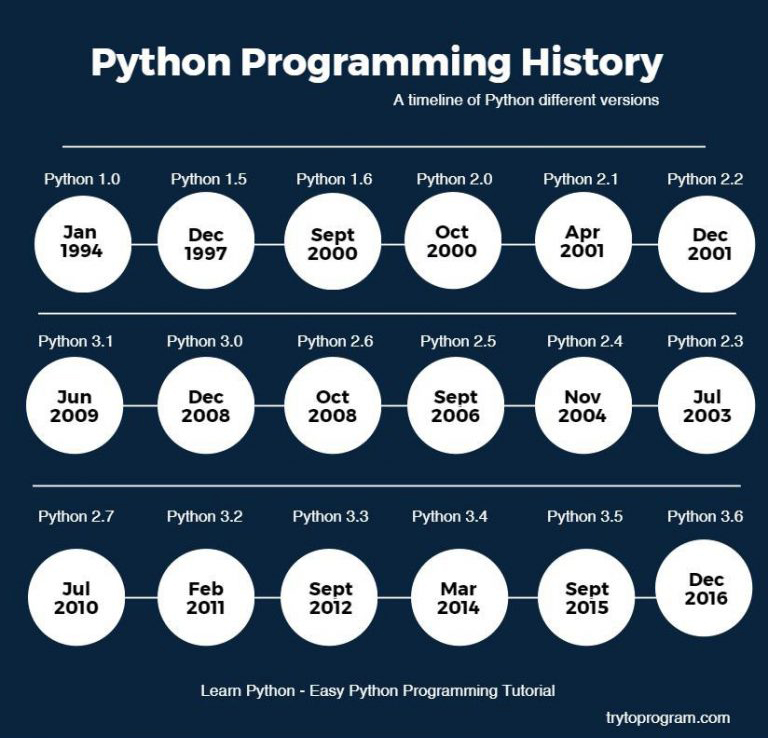 So that’s all about the history of Python programming.