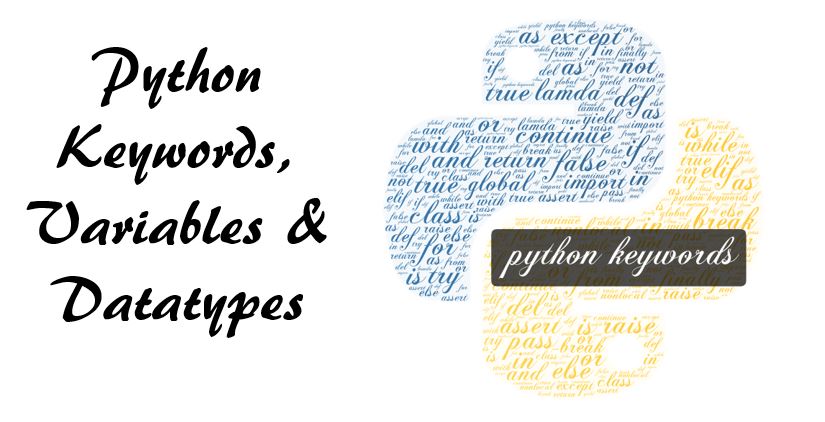 Well, like in every other programming language, keywords are the reserved words which have predefined meaning and functionality.

Basically, identifiers are the unique name given to variables, functions, class and other entities in Python.

There are certain rules that need to be followed while giving a name to any entities in Python.

Rules for writing an identifier in Python

What is a Variable?

A variable is actually a memory location reserved to store some value.

In other programming languages like C, C++ variable type must be defined explicitly.

But in Python, the values assigned to the variable determines its type. We don’t need the explicit declaration in Python to reserve memory space.

Like we mentioned in Python, you don’t need to declare types of variable explicitly. Interpreter automatically detects the type of the variable by the data it contains or it is assigned.

To assign a value to the variable, an equal sign(=) also known as assignment operator is used.

So far we know that variable reserves a memory location to store a value and when that variable is assigned a value, it’s stored in that location.

Now, how much memory does that variable occupies depends on the type of data it is assigned to. So, the data types designate the memory required to store the variable.

As the name suggests, the data types which store numeric values are called Python Numbers.

Strings in Python are the sequence of characters stored in contiguous memory location i.e. array of characters. These set of characters are represented in either single quote or double quotes.

‘+’ is used to concatenate the string in Python.

List in Python is an ordered sequence of items separated by a comma(,) and enclosed within square brackets([ ]). Python list is mutable, which means that the value of items can be altered by accessing it using slicing operator [ ].

Python tuple is same as Python list, the only difference being that the Python tuples are immutable which mean that the items in Python tuples can be accessed but their value can’t be altered.

Here is one example.

If we have the key, we can retrieve its value anytime, however vice-versa doesn’t work. Hence Python dictionaries are used and optimized for retrieving data.

Dictionaries in Python are defined inside curly braces ‘{ }’ and to access and assign value, slicing operator  ‘[ ]’ is used.

In Python dictionary, Keys are immutable and Values are mutable.