In this article, you will learn in depth about Python strings and different kind of functions and operations in strings. 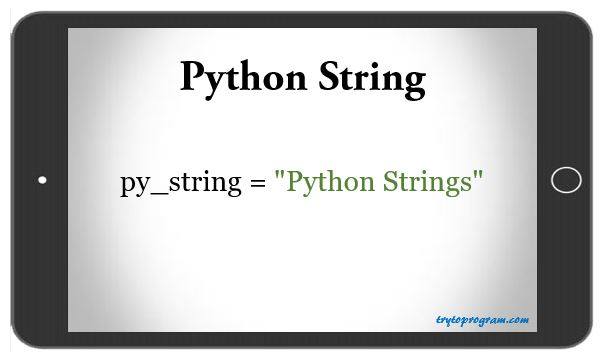 A string is a sequence of characters which is treated as a single data item. Python strings are array of characters or any group of characters defined between double quotes or single quotes.

The characters in the string are stored in the consecutive memory location as the string is treated as an array of characters. Each character occupies 1 byte in the memory heap.

Python strings are also immutable, meaning they cannot be modified once created.

Creating strings in Python is as simple as assigning a value to the variable. The value that is being assigned must be in either within double quotes " " or single quotes ' ' for the string.

A string literal can be of multiple lines as well. In such cases, triple quotes are used.

Here are the examples to demonstrate Python strings.

How to concatenate strings in Python?

In Python, this is achieved by using + operator.

How to calculate the length of a string?

Python has built-in function len(string_name) which calculates and return the length of a string supplied as an argument.

Here in the example, the length of the string is 9 because it also counts the whitespace in between.

Once we create Python string, we can’t modify them but we can access the characters in the string and use them in further operations.

Before jumping into examples, let us first know about indexing and slicing.

Indexing actually means locating an element from a Python sequence (list, string, tuple, dictionary or any) by its position in that sequence. This indexing starts from zero meaning the first element of the sequence holds the index '0'.

There are two ways we can index string or any sequence in Python:

For example, consider the following string with 4 characters.

Now, if we index with positive integers using the indexing operator '[ ]':

And if we index with negative integers, then

Note: Only integers are allowed in indexing.

What is Slicing in Python?

Slicing as the meaning goes is basically chopping or retrieving a set of values from a particular sequence.

In slicing we define a starting point to start retrieving the values, an endpoint to stop retrieving (the endpoint value is not included) and the step size. Step size is by default 1, if not mentioned explicitly.

And the retrieved set of characters from the string is known as Python slices.

Now that we know about indexing and slicing, let’s learn about using slicing and indexing to access characters from Python strings with examples.

Where index_char is the index of the character to be accessed from string py_str.

For example, if we have a string named py_str, we can access its 5th character by using py_str[4] as the indexing starts from 0.

Iterating through  the string in Python

Now let’s write another example using while loop to check if a character is present in the string or not.

An escape character is a non-printable character which is represented with a backslash '\' and are interpreted differently.

When do we need escape sequences?

Well, we need escape sequences in many things while coding. Here is one example.

But, what if we have both double quotes and single quotes in a string.

That is because when the interpreter encountered closing double quote at I, it interpreted as the end of the string, hence generating the syntax error.

We can address such errors with triple quotes, but when triple quotes occur in between the string, it will again generate the error.

Here is the list of escape sequences in Python.