In this tutorial, you will learn about c programming while and do while loop and how they are used in programs along with examples.

While and do while loop in c programming

Sometimes while writing programs we might need to repeat same code or task again and again.

For this C provides feature of looping which allows the certain block of code to be executed repeatedly unless or until some sort of condition is satisfied even though the code appears once in the program.

while loop in C

The while loop repeats the block of code until some sort of condition is satisfied.

In this statement condition is: " I have money in my account " and the task is " keep shopping ". So until the condition is true shopping will be done repeatedly and when the condition becomes false task will be stopped.

Structure of while statement

How while loops work in C then?

As shown in the above structure a condition is placed which determines how many times the code is to be repeated.

Following flowchart explains more accurately the concept of while loop in C programming. 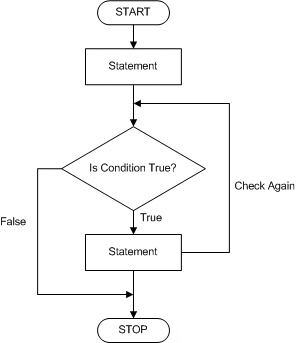 Example to highlight the concept of while loop in C.

Programming Tips
Counter variable like i should be initialized before while loop otherwise compiler will report an error and if you forget to increase/decrease the counter variable used in condition, the loop will repeat forever and there will not be any output.

do while loop in C

Exit controlled means unlike while loop in do..while first the code inside the loop will be executed and then the condition is checked.

In this way even if the condition is false the code inside the loop will be executed once which doesn’t happen in while.

Syntax of do while loop

Flowchart of do while loop 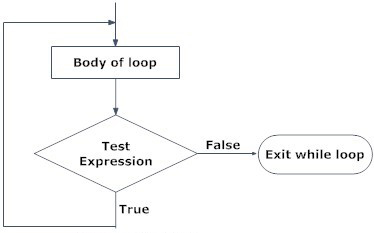 Example: Do while loop

Programming Tips
Note that curly braces can be ignored if the body of loop contains one statement only and don’t forget to put a semicolon at the end of while(condition); otherwise, it will be an error.