In this tutorial, you will learn about c programming for loop and how it is used in programs. Relevant examples will follow to highlight for loop concept in C.

for loop in C programming

While writing programs, we might need to repeat same code or task again and again.

For this C provides a feature of looping which allows a certain block of code to be executed repeatedly unless or until some sort of condition is satisfied even though the code appears once in a program.

There are three types of loops in C programming.

Structure of for loop in C

Here, statement1 is the initialization of loop, statement2 is the continuation of the loop. Normally, it is a test condition and statement3 is increment or decrement of a control variable as per need.

Here is the block diagram to show how a for loop works: 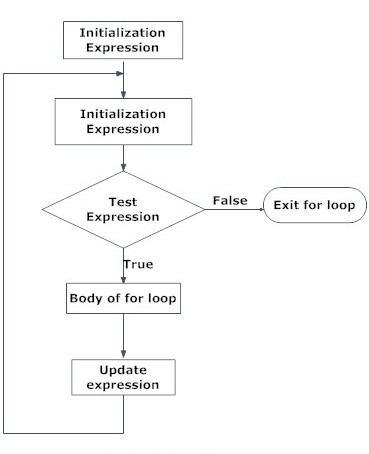 Common Programming Error
Using commas instead of a semicolon in the header expression of for loop.

Header format of for loop in C

How for loop works?

In the above example, counter is the control variable and counter = 1 is the first statement which initializes counter to 1.

The second expression, counter <= 5 is the loop continuation condition which repeats the loop till the value of counter exceeds 5.

Finally, the third expression, counter++ increases the value of counter by 1.

So the above piece of code will print 'hello' five times.

Good Programming Practice
If you forget to write statement1, statement2 and statement 3 the loop will repeat forever. To prevent from infinite repetition write conditions carefully and don’t forget increment or decrement.

Example of for loop

Suppose the user entered value 2. Then the value of n will be 2.

Now the value of 'i' is incremented by one i.e. i = 2 and again program will check test expression, which is true and program will print 'simple illustration of for loop'.

This time test expression will be false and the program will terminate.