In this article, you will learn in depth about Python functions, their types, syntax, structure and other components. You will also learn about the scope of the variables used in functions. 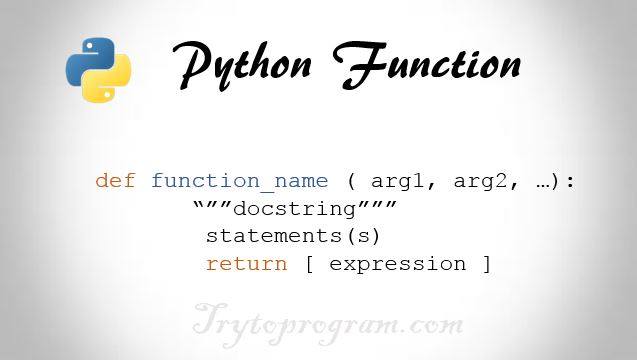 A function in any programming language is a single comprehensive unit (self-contained block) containing a block of code that performs a specific task.

This means function performs the same task when called, which avoids the need of rewriting the same code again and again.

Functions help in the simplification of complex programs by breaking it into modules.

Imagine you are developing an application in Python and you need to write a huge amount of code for it. In that application, you need to compare values and find the maximum value many times in the program.

Now if you write code to compare value and find maximum one at every need step in the program, the code will be too huge making it extremely difficult to manage and debug.

To address such complexity and make the program more manageable, Python allows you to give a name to a block of statements, allowing you to run that block using the specified name anywhere in your program and any number of times. That name is called function and you can call it anywhere instead of writing the block of codes repeatedly. Besides, functions also make the code reusable.

Types of functions in Python

There are two types of functions in Python.

You will discover more about these later in this tutorial.

How does a function work in Python? 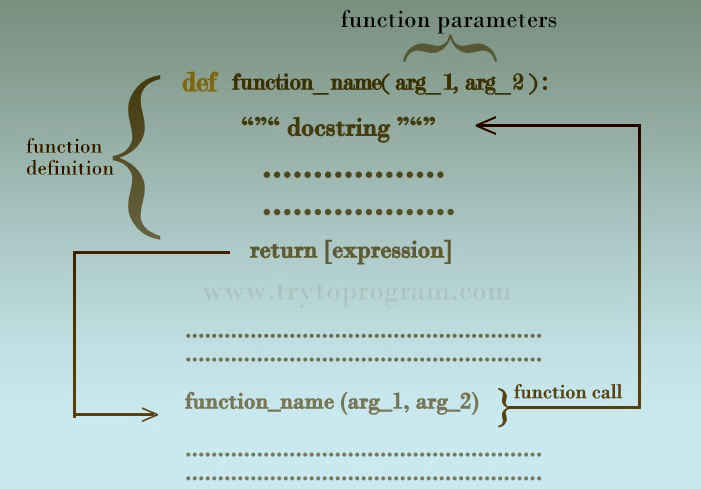 Once a function is defined, we need to call the function in the main program to execute the function. For that, there is function call statement.

Let’s go through each keyword, expressions, and statements used in the function.

Let’s look at the syntax of function definition in Python and explain it bits by bits afterward.

Defining a function means giving the function a name, specifying the parameters and defining the operation of function with code statements.

Here is the basic syntax of a function call in Python.

As we saw in the function definition, the first statement of the body function is a documentation string called doctsring, which explains in brief about the function and its operation. In Python, string literals are used for documenting modules.

We can access the docstring by __doc__ attribute. For example function_name.__doc__.

Note:  The doc attribute has two underscores(__) before and after. Using single underscore (_) will raise an error.

Here is the example to show how we can access the docstring in Python functions.

This script will generate following output.

The return statement ends the execution of the function and returns the value of expression following the keyword return to the caller.

If the return expression has no expression or if there is no return statement in the function, a special value 'None' is returned.

The return statement in a function is used to return a single value or a single object, be it an integer or a floating point number.

But what if we wanted to return multiple values from a function with the return statement.

So let’s see how we can achieve this.

How to return multiple values using the return statement?

Multiple return statements are not allowed in Python functions. So, the only way to return multiple values from a function is by returning lists or tuples which can have multiple integers or any other data type. This is the indirect way of returning multiple values.

As shown in above example, we can return multiple values using tuples or lists or dictionaries. But it becomes problematic if the number values to be returned is huge.

Now that we know about function definition, function call, docstring, and the return statement.

let’s go through one example to illustrate all the concepts. We will learn in depth about function parameters or arguments in the next article.

In this example, we will depict both return type and non-return type user defined function to find the sum of two numbers.

The program works perfectly fine as we expect, but one can get confused with the use of the same variable a, b, and x in both the functions.

Let’s learn in detail about the scope and the lifetime of a variable in the Python functions.

Scope and lifetime of the variable

The scope of a variable determines its accessibility and availability in different portions of a program. Their availability depends on where they are defined. Similarly, life is a period in which the variable is stored in the memory.

Depending on the scope and the lifetime, there are two kinds of variables in Python.

Here are some of the points to list out the difference between global and local variable for their proper understanding.