In this article, you will learn about Python files I/O from opening a file to reading it, writing it, closing it and various other file operations. 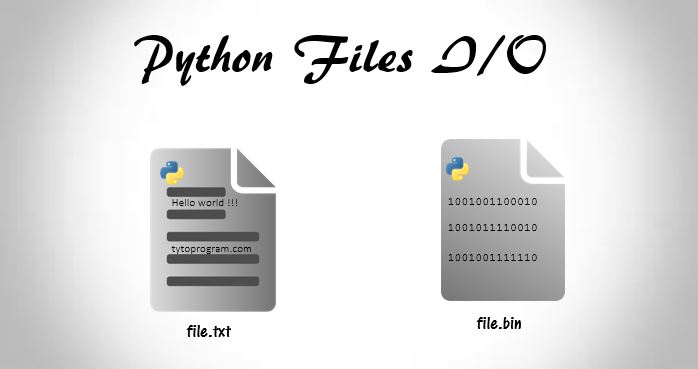 A file simply is a collection of data stored in the form of a sequence of bytes in a machine.

It’s a collection of data or information stored in the memory heap that has a name called filename.

There are two types of files in Python.

Text files are humanly readable which is displayed in a sequence of characters that can be easily interpreted by humans as it presented in the textual form. Common editors like notepad and others can be used to interpret and edit them.

They can be stored in plain text (.txt) format or rich text format (.rtf).

In binary files data is displayed in some encoded format (using 0’s and 1’s) instead of plain characters. Typically they contain the sequence of bytes.

They are stored in .bin format.

Any file operation can be broken down into three major steps: 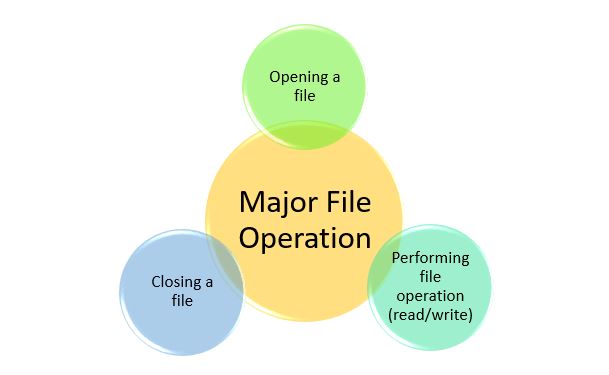 Python has a built-in function open() to open a file. This function creates a file object.

Here is the syntax.

Let’s create a text file example.txt and save it in our working directory.

Now here is the code to open the file.

In above example, f is a pointer variable pointing to the file example.txt.

To print the content of and details of example.txt, here is the code.

Closing a File in Python

When we open a file in Python, it must be closed once we finish all the operations because we don’t know when data is flushed. Hence, to free up tied up resources and clean up garbages we must close the file after finishing the operations.

Python automatically closes a file once the object is assigned to another file.

Here is how the file closed in Python.

One method is to just open up files and simply close it using close( ) method.

So after we close the file, we cannot use the file until we open it again.

Another method is to use try/finally which ensures that after opening the file if file operations raise an exception, the file will be closed properly.

What happens while closing file directly is that of the operations raise an exception, the program will terminate without properly closing the file.

Here is how it is done.

Note: The file must be opened before try statement because if open statement itself raises an error, the file won’t be opened to close it.

This method will ensure that, if the file operations somehow raise an error, the file will be closed before the program is terminated.

Another method is by using with statement, which simplifies exception handling by encapsulating both initial operations and closing or clean up tasks.

We don’t need close statement because with statement will automatically close the file.

Here is the implementation of with statement.

Reading and writing files in Python

In Python, we can read the files and write to files by opening up the file in corresponding modes.

The read( ) function is used to read the content of a file after the file is opened in reading mode ( mode = r).

Now the interpreter has read 7 characters of the file and if we again use read( ) function,  it will start reading from 8th character.

The readline( ) function is used to read the content line by line. It is useful for the large files and we can get access to any line at any moment.

Now let’s see how readline( ) function is used in test.txt.

Notice that the each line is separated even while reading all lines.

The write( ) function is used to write into files in Python opened in writing mode.

Opening a file in writing mode will create a new file if the file we attempt to open doesn’t exist.

Let’s assume we don’t have file xyz.txt. Hence it will be created while we open the file in writing mode.

The function rename( ) is used to rename a file in Python. For this we need to import os module first.

Here is the syntax.

This is how we can get the current position in the file and shift the position as well.

Here is the tabular presentation of Python file methods.