In this tutorial, you will get familiar with c programming variables and constants.

Actually variable is the location of a place in computer’s memory where the data is stored. To put it up simply, we can say a variable is a box in which we can store data.

Each variable is given a unique name called Identifier. So variables like num1, num2 and others actually correspond to a location in computer memory.

Here num1 is a variable of integer type.

It is called variable because it can hold different values at a different time.

Difference between variable and constant 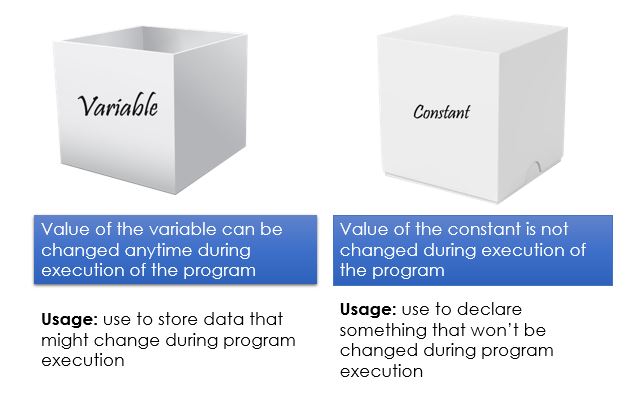 Constants are the expressions with fixed values that do not change during the execution of the program. To put it up simply constant means whose value cannot be changed.

Following are the different types of constants we can use in C.

They are numeric constants with decimal points. The real constants are further categorized as:

Mantissa E exponent: where the Mantissa is either integer or real constant but the exponent is always in integer form.

Character constants are the set of alphabet enclosed in single quotes. For example: ‘A’, ‘f’, ‘i’ etc.

As same as declaring a variable using the prefix const we can create new constants whose values can’t be altered once defined.

This signifies that b will have a constant integer value of 100. Not only integer, by using prefix we can declare character constant and string constant as well.

String constants are the sequence of characters enclosed in a pair of double quotes (” “).

Here var1, var2 and var3 are the values of enumerated datatype type_name.

By using assignment operators, we can assign any value to var1, var2 and var3.

The member without assigned value will possess the 1 higher value than the previous one. In this case, green will be set to 6.