A function is a single comprehensive unit (self-contained block) containing a block of code that performs a specific task.

This means function performs the same task when called which avoids the need of rewriting the same code again and again.

Types of functions in C programming

Library functions are built-in standard function to perform a certain task. These functions are defined in the header file which needs to be included in the program.

The user defined functions are written by a programmer at the time of writing the program. When the function is called, the execution of the program is shifted to the first statement of called function.

Good Programming Practice
Each user-defined function should perform a specific task and function name should express that task which promotes reusability.

In the above program, function area is invoked or called in the main function. The execution of program now shifts to called function area which calculates the area of square. The void in funtion prototype indicates that this function does not return a value.

Syntax of a function definition

The function_name is an identifier.

How does function work? 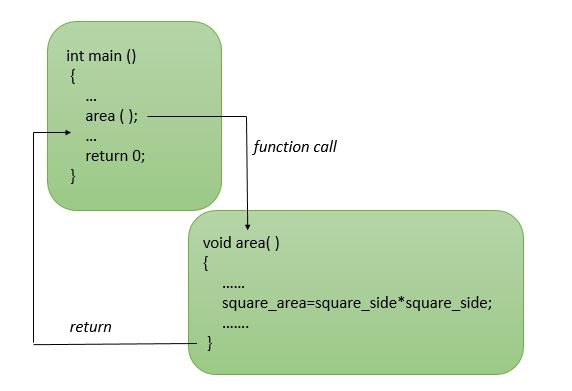